As a bonus, now well into retirement, he learned something new about the company where he built a three-decade career.

The Brandon resident, 73, underwent double bypass surgery and an aortic valve replacement on Sept. 10. Recovering in hospital, he was urged to cough to prevent a fluid build-up that promotes pneumonia. A heart-shaped pillow made it easier. 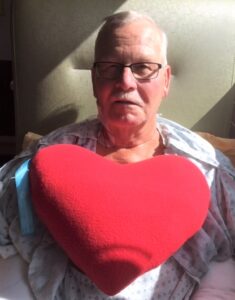 “Coughing doesn’t hurt nearly so bad with this pillow. It gives you confidence.”

Wark, who retired from MTS in 1996 – then still named Manitoba Telephone System – learned the supportive pillow was assembled by Bell MTS volunteers.

“That made me appreciate the volunteers and the effort.”

Bell MTS Volunteers – an organization of current and former employees, friends, and family – provides volunteers and resources to a wide variety of people, organizations, and events across the Manitoba.

Their Heart Pillow Project provides cardiac surgery patients at St. Boniface Hospital with handmade heart-shaped pillows aid in post-operative deep-breathing and coughing exercises. The pillows provide compression against the breastbone as it heals from a surgical incision.

Jo-Anne Pelzer leads the volunteers in making some 900 heart pillows a year – each “made with love and never used in a pillow fight.”

Nearly eight weeks removed from his stay at St. B., Doug Wark is still using his heart pillow. He’s keeping busy at home, with a grateful heart of his own.

“I can’t say enough about Dr. (Michael) Raabe and his entire team. Dr. Raabe was great at explaining what was going to happen. I had a super bunch of nurses. Some of the nurses are very young, but they’re all so professional. They had me up and moving in no time.”

Grateful for the care you received at St. Boniface Hospital? Say thanks!

Donate to the Grateful Patient Program