“Brett, there’s a problem with your aortic valve.”

The cardiologist had called Brett Arnason in the departures lounge at Winnipeg Richardson International Airport. It was February 2013, and the 63 year old was on his way to compete in the World Masters Speedskating Competition in Munich, Germany.

The results of an echocardiogram (ECG) test showed that Arnason had been born with a bicuspid aortic valve with two flaps instead of three. With age, the defect had started to restrict his blood flow. Surgery to replace his aortic valve would be booked as soon as he returned home.

“You have a valve opening of 0.7 cm. If it were 0.6 cm, we would rush you to the Hospital,” the cardiologist told him. “Can you at least take it easy in Munich?”

Ever the competitor, Arnason came in third place.

The cardiac surgery turned out to be his first of three at St. Boniface Hospital, two of them during the pandemic. 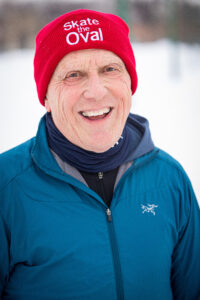 Arnason’s wife, Marnie, says he’s the type of guy who’s always had this feeling that he’s invincible; that he always finds a way to solve problems. Arnason is a pilot and has experienced near-crashes in airplanes. “I’ve never believed I’m going to die. I get rattled, but never panic,” he said.

Surgeons replaced his bicuspid aortic valve at St. Boniface in June 2013 with a valve manufactured out of BioTissue, innovative medical technology that did not require him to be on blood thinners. He was out of the Hospital three days later.

Arnason went back to racing that November and continued for several years until he started having trouble keeping up with his training partners.

“I developed a chronic cough and acid reflux. I stopped racing in 2020,” he said. “I saw my cardiologist that June and my electrocardiogram (EKG) test was normal. We couldn’t figure out what the problem was. Maybe I was just getting older.”

Later that same month, he woke up one morning with his head soaked in sweat. Feeling woozy, he sat down in his kitchen. “I got back up and took a few steps. I don’t remember what happened next, but I must have passed out. Marnie heard the ‘thump’ as I hit the floor – I was having a heart attack.”

Paramedics rushed him by ambulance to St. Boniface Hospital’s Cardiac Catheterization Lab for emergency treatment. A little more than one hour after his wife called 911, he had a stent to unblock his right coronary artery and was already in recovery. (This lightning-quick, life-saving response was due in part to provincewide STEMI heart attack protocols that were developed and implemented through research funded by Foundation donors.)

However, more unwelcome news was in store for him: his aortic valve was found to be failing and would have to be replaced.

The surgery was at St. Boniface in late September. He was out of the Hospital four days later, a day longer than the previous time.

The shaking started in January 2021. Arnason was feeling unwell again; he began to shake uncontrollably for up to an hour at a time. One day late that month, he went to St. Boniface Hospital’s Emergency Department, where it was discovered his heart rhythm was abnormal.

Blood tests produced more shocking news: a bacterial infection in his new aortic valve. A broad scope antibiotic took care of it, but too late: the bacteria had eaten the valve and destroyed heart tissue. Yet another cardiac surgery was in his near future, at 71 years old. He was also going to need a pacemaker, his doctor told him. 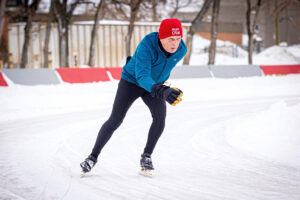 “They told me the valve replacement surgery this time was never going to be easy. The surgeons would have to build aortic extensions, a complicated and time-consuming procedure. It ended up taking four doctors almost 14 hours to complete, with 14 staff members on the team,” said Arnason.

“I found that every single one of the people I dealt with at the Hospital, from doctors’ assistants to physiotherapists, know that they’re good at what they do. I believe their confidence stems from the steadfast support that Foundation donors provide. With the support they get, they can do their utmost to make patients’ lives better.”

Today, Brett Arnason is grateful to be speedskating again. “I can enjoy my family. I’m a happy guy. I’m golfing, flying airplanes, riding horses, and most importantly, I can play again with my grandson, Franklin.”

Be a lifeline for cardiac patients like Brett Arnason. Donate today.