Dr. Lloyd Axworthy sat down on a bench in the Arrivals area of Winnipeg Richardson International Airport after disembarking. He was out of breath.

“Maybe I’m getting old,” the veteran Canadian politician and humanitarian thought to himself. “Maybe it’s something else,” he worried.

Axworthy, a former federal cabinet minister, former university president and vice-chancellor, and current chair of the World Refugee Council, had been in Toronto to give a talk that morning in November 2019 as part of his ongoing work on human security, global migration, refugee protection and human rights in Canada, and abroad.

As usual for Axworthy, his schedule was full: “I had just come off a major series of events in different refugee camps around the world, and at the same time I’d been asked by the federal government to be the Canadian envoy to Ukraine for elections there,” he said.

After calling his wife, Denise Ommanney, and taking a taxi home to River Heights from the airport that day, he was still having trouble catching his breath. A friend rushed Axworthy to St. Boniface Hospital’s Emergency Department, where he was quickly assessed. 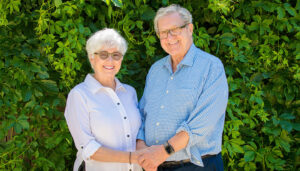 To his surprise, less than a week later, Axworthy found himself in the Hospital for life-saving cardiac surgery – put “under the knife” for seven hours to replace a valve that wasn’t properly controlling blood flow through his heart, and to tighten another one.

“Come to think of it, as I look back now, I was short of breath whenever I went out for a walk, but I had an intense schedule and I thought, ‘I’m just getting older.’ Fortunately for me, on that trip back I had this wake-up call – more of a scare, actually – coming off the airplane,” he said.

Being fearful was natural. “There’s no doubt that it’s the great unknown,” he said. “I do recall being wheeled in for the operation, and wondering, ‘Am I going to come back or not?’ That’s the natural view, but I couldn’t speak more highly of my surgeon and the people around him.”

“The nursing staff were terrific in terms of explaining things. There was always a sense of confidence; I never had the feeling that anybody was slacking. I’m sure they were working long hours, and under real pressures, but I always found that the treatment and the respect that they engendered was very impressive,” he said.

Axworthy took about two weeks to recover in the Cardiac Surgery Inpatient Unit (CSIU) located on the fourth floor of the I.H. Asper Institute at the Hospital, home to Manitoba’s Cardiac Centre of Excellence. The CSIU cares for patients before and after their cardiac surgery or related procedures, following a stay in the Intensive Care Unit.

Equal care for all

The post-op recuperation period gave him time to reflect. “There were a couple of things I noted,” he recalled. “For one, I was eternally grateful that we have in Winnipeg a Cardiac Centre of international reputation, knowledge and experience.”

“One of the advantages of having the Centre of Excellence at St. Boniface Hospital is that they’re engaged in cardiac research there, and that becomes applicable. So, it’s not that they’re reading from the manuals, but that they’re helping to rewrite them. Our surgeons and researchers are out there on the leading edge, developing better techniques.” Research Infosource Inc. has ranked St. Boniface as Western Canada’s number one research intensive hospital of its size, eight years in a row.

“Secondly, I was also impressed and admiring of the way in which the Hospital and its staff worked on a basis of pretty clear equality. The other patients I was with, my roommates for example – one fellow was a truck driver from Ontario. I didn’t get the sense there was any sort of preferred queue. Instead, everybody was going to get the treatment they required.”

“There was a strong sense that everything was being done in terms of my own improvement and getting well.”

Axworthy’s political career spanned 27 years, six of which were in the Manitoba Legislative Assembly and 21 more in the Federal Parliament. “Because of my long number of years in government, I’ve always had a basic admiration for our health system. But when you get personally involved, at ground zero, you see how good it can be,” he said.

“The experience I had at St. Boniface Hospital made me come away with a very high regard and esteem for just how good and effective our health care is.

Although held back recently by both the pandemic and his own recovery process, Axworthy is starting to feel ready to return to his busy schedule and travelling.

“On my latest visit to my doctor, all the signs are positive! My blood-oxygen level has gone up to 98%. When I was operated on, it was down to around 80%. I have probably another couple of months to go before my immune system is back up to snuff; same thing with my vitality.”