The business of everyday life isn’t cancelled this year – as Matthew Nicolas can tell you.

Life goes on in the pandemic. Matthew knew this well, from his work as a Realtor with Royal LePage Dynamic Real Estate. Then, in early October, he became one of more than 13,000 surgery patients who receive compassionate care at St. Boniface Hospital annually. 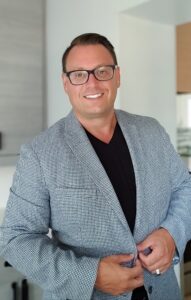 When the pandemic reached Winnipeg in the spring, Matthew had clients who suddenly found themselves at risk of being homeless as the city locked down. “We had already sold their house; they were moving, and they needed to buy something,” he said. “We really knew nothing about the virus at that time.”

“We still had to go out and do our best, and make sure people were looked-after.”

It’s the same at St. Boniface Hospital, where caregivers and front-line staff continue to provide essential care for Manitobans who face critical and complex conditions outside of the pandemic.

“Babies continue to be born in the pandemic; people get divorced and have to move; people pass away. All these things keep happening every day, and it’s up to us to keep helping people out,” he explained. “It’s a new normal for us all.”

Matthew’s own sense of normal was upended at the end of September, when the hernia he had been diagnosed with a couple of weeks earlier started giving him more trouble.

“It started to get pretty bad,” he said. “There was some stuff going on that I didn’t feel was ideal, so I called my doctor.”

From Urgent Care at Victoria General Hospital, Matthew was transferred to St. Boniface Hospital early in the morning on October 1. He was admitted as an inpatient of the Surgery Program on the 4th floor.

“Everyone there was so kind, they explained exactly what was going to happen; they were attentive and made sure I felt OK. It was a comforting experience, and nice to have such a kind welcome to the Hospital.” After spending the day in his hospital room, Matthew went into surgery just past 9 p.m. and was in recovery by just past midnight on October 2.

“My surgeon called my girlfriend to let her know that everything had gone well. Which she appreciated, because she had been worried about me!” He was discharged later that same day.

The Surgery Program staff were really on top of things, he said. “They made it a pleasurable experience for me, even though it was quite…uncomfortable, if that makes sense,” he laughed.

You can join us in this critical response effort by donating today.

Donate to the Grateful Patient Program